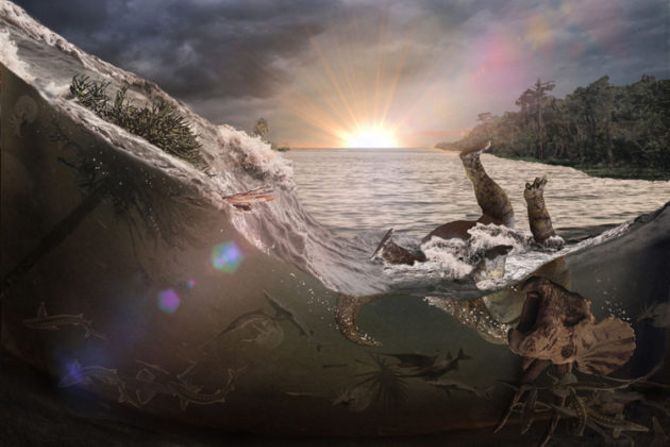 Scientists say a meteor impact 66 million years ago generated a tsunami-like wave in an inland sea that killed and buried fish, mammals, insects and a dinosaur. (Illustration courtesy of Robert DePalma)

First, there was a violent shock. Then, there was the roar of a 30-foot-high wave of water, throwing fish onto a sandbar in what is now North Dakota. Then there was a hail of molten rock, pelting dying fish and soon-to-be-dying land creatures. Then the fires began.

That’s how the doom of the dinosaurs began, nearly 66 million years ago, according to a study to be published in the Proceedings of the National Academy of Sciences next week.

For decades, scientists have surmised that the doom came about when a giant asteroid or comet struck Earth just off the coast of Mexico’s Yucatan Peninsula. The new study lays out a scenario for how that cosmic impact killed off species thousands of miles away, closing off what’s known as the Cretaceous Period.

An ancient layer of rock, uncovered at a site dubbed “Tanis” in North Dakota’s Hell Creek Formation, revealed the fossilized remains of fish, snail-like sea creatures called ammonites and a marine reptile known as a mosasaur, plus land animals including mammals and a Triceratops, Mixed in with the fossils were bits of burned tree trunks, sediment and tiny glass beads known as tektites.

The research team behind the find was led by Robert DePalma, curator of paleontology at the Palm Beach Museum of Natural History in Florida and a doctoral student at the University of Kansas. DePalma has been studying the Tanis site since 2013, and he says it sheds new light on the chain of events that created the famous geological and biological dividing line known as the Cretaceous-Paleogene boundary, the Cretaceous-Tertiary boundary or simply the K-Pg or K-T boundary.

“This is the first mass death assemblage of large organisms anyone has found associated with the K-T boundary,” DePalma said in a news release. “At no other K-T boundary section on Earth can you find such a collection consisting of a large number of species representing different ages of organisms and different stages of life, all of which died at the same time, on the same day.”

DePalma and his colleagues reconstructed the sequence of events on that fatal day by looking closely at the section of rock.

“It’s like a museum of the end of the Cretaceous in a layer a meter and a half thick,” said study co-author Mark Richards, provost and professor of earth and space sciences at the University of Washington.

The detective work drew upon an analysis from Richards and Walter Alvarez, a professor at the University of California at Berkeley who helped lay out the original giant-asteroid hypothesis nearly 40 years ago. They sized up the evidence for the tsunami-like wave and the hail of glass beads, and laid out a scenario that started with the asteroid impact setting off a magnitude 10 or 11 earthquake.

That seismic shock could have created a series of standing waves, also known as a seiche, in a body of water known as the Western Interior Seaway that scientists say stretched through the middle of North America during the Cretaceous Period.

Meanwhile, the asteroid impact would have thrown up a massive plume of molten rock that turned into sphere-shaped tektites, raining down from space across a wide swath of Earth’s surface. Richards and Alvarez concluded that the standing waves must have washed up fish at the Tanis site before the deadly hail was through. 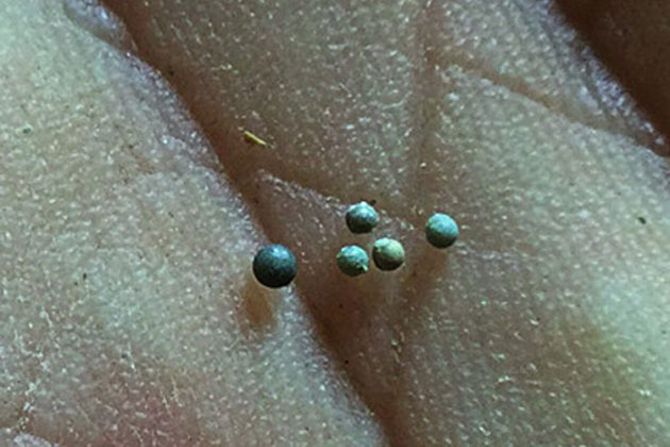 Millimeter-wide spherules of glass, known as tektites, were found at the Tanis site. (Robert DePalma Photo)

“The seismic waves start arising within nine to 10 minutes of the impact, so they had a chance to get the water sloshing before all the spherules had fallen out of the sky,” Richards explained. “These spherules coming in cratered the surface, making funnels — you can see the deformed layers in what used to be soft mud — and then rubble covered the spherules.”

The layer of sediment that covered the rubble was rich in iridium, confirming the connection to Alvarez’s giant-asteroid hypothesis.

“When we proposed the impact hypothesis to explain the great extinction, it was based just on finding an anomalous concentration of iridium — the fingerprint of an asteroid or comet,” Alvarez said. “Since then, the evidence has gradually built up. But it never crossed my mind that we would find a deathbed like this.”

The researchers say the carnage must have begun quickly — too quickly to be explained by a tsunami emanating from the site of the Chicxulub asteroid impact. “A tsunami would have taken at least 17 or more hours to reach the site from the crater, but seismic waves — and a subsequent surge — would have reached it in tens of minutes,” DePalma said.

DePalma credited Richards with refining that part of the scenario.

“When Mark came aboard, he discovered a remarkable artifact — that the incoming seismic waves from the impact site would have arrived at just about the same time as the atmospheric travel time of the ejecta,” DePalma said. “That was our big breakthrough.” 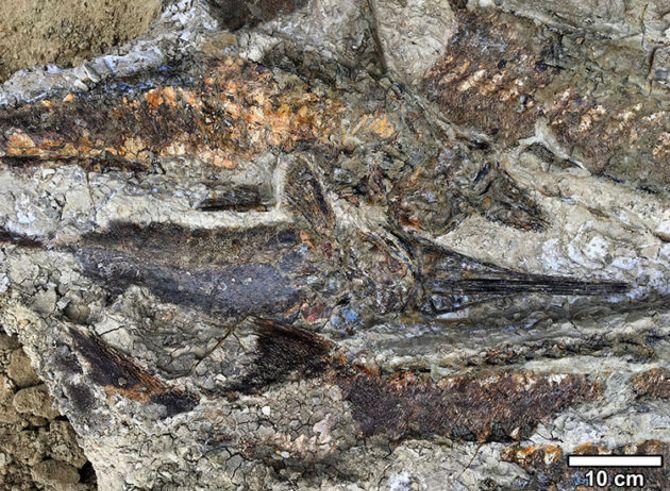 Fossilized fish are piled atop each other, suggesting taht they were flung ashore and died stranded together on a sandbar after a tsunami-like wave withdrew. (Robert DePalma Photo via UC-Berkeley)

Dutch geologist Jan Smit conducted tests on the tektites from the Tanis site — and confirmed that they dated back to the K-T extinction.

Some of the tektites were embedded in amber, and some were embedded in fossilized fish gills. “That by itself is an amazing fact,” Smit said. “That means that the first direct victims of the impact are these accumulations of fishes.”

The researchers surmise that the final act of the K-T mass extinction began when the hot hail of tektites sparked widespread wildfires, killing off many of the creatures that survived the initial shock.

The precise location of the Tanis site is being kept secret to protect it from being tampered with. “We have gone 40 years before something like this turned up that may very well be unique,” Smit said. “So we have to be very careful with that place, how we dig it up and learn from it.”

Update for 8:40 p.m. PT March 29: The study has been drawn skepticism even before its formal publication, as paleontologist Kenneth Lacovara points out on Twitter. As a result, we’ve revised this report’s headline to be more circumspect. Here are a few tweets to get you started on the Twitter threads:

I've been busy all day giving a talk at a story-telling conference. In the mean while, @laelaps and @SteveBrusatte have made poignant comments, in this thread, on the new K/Pg paper. (Actually, on the already publicized, but yet to be released, K/Pg paper.) https://t.co/ejVuFquYsq

There is so much that’s suspicious about this @NewYorker story that my bullshit alarm is going off at full blast. @SteveBrusatte is already on this, but wow… this is someone with a severe case of Bakkeritis trying to fast track fame. https://t.co/MQKF4ELLFN

« Previous Scientific sleuths discover a fossilized killing field from the day the dinosaurs died
Next » Should gender diversity on corporate boards be legally required? Women VCs, tech execs weigh in