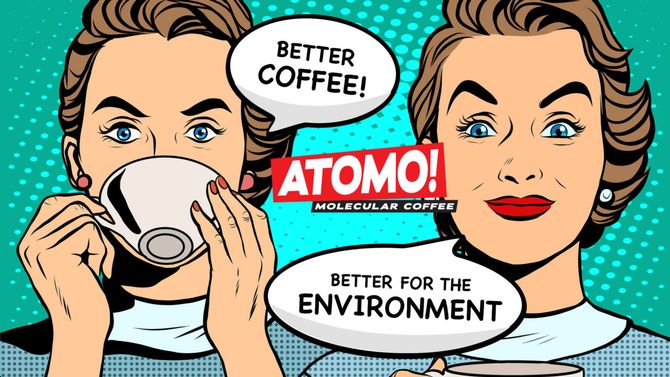 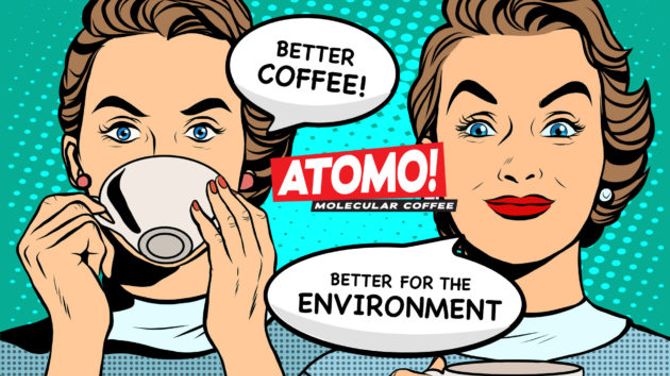 Andy Kleitsch was pacing, sipping and talking rapidly during a phone conversation on Thursday morning. The Seattle entrepreneur had had multiple cups of coffee already — and he’d just launched a Kickstarter aimed at upending what we think we know and love about the beverage.

Kleitsch and Jarret Stopforth are the co-founders of Atomo, a startup that claims to have “hacked the coffee bean,” in so much as they’ve removed it from the process of making coffee and substituted it with a molecular concoction derived from naturally sustainable (and secret) ingredients.

Kleitsch is a tech vert who once worked at Amazon among other places, and he currently leads entrepreneur workshops at the University of Washington. He started looking for his “next thing” about six months ago and reached out to friends in Seattle.

“I got all kinds of great ideas,” Kleitsch said. “I heard ideas around firefighting robots and all kinds of things. But Jarret said, ‘I want to make coffee without the bean.’ And that was just too good. It blew my mind.”

Stopforth is a Ph.D. with extensive experience around food safety and quality at companies such as Chobani and Campbell Soup.

“I love coffee, but every day I was adding cream and sugar to mask coffee’s bitter flavor” Stopforth said. “By replicating the taste, aroma and mouthfeel of coffee, we’ve designed a better tasting coffee that’s also better for the environment.”

The sustainability element of Atomo’s mission is driven by the belief that regions where beans are grown will be greatly impacted in the coming years. The company points to a report by Science Magazine last month that said “60 percent of the world’s coffee species were in danger of going extinct in the next 50 years due to climate change, population expansion, and disease.”

People’s coffee ritual is very important to them. And so we want to fit into that ritual.

Atomo promises that its ground coffee will be suitable for drip machines, French presses, refillable K-Cups, and pour-overs. The grounds will be made of a non-allergen, Kleitsch said.

“It’s not going to be made out of peanut shells,” he said. “What we’re really excited to do is find a material that we can upcycle — naturally occurring ingredient that is probably a spent item, that is usually thrown away from a different food process and give it life again.”

Disrupting something that is so near and dear to the tastebuds and culture of so many people, and doing it in a coffee capital like Seattle, is a big deal. Atomo could simply create a liquid product without worrying about the grounds and consumer’s brew habits. But the five-person company is made up of coffee lovers who respect all that goes into being addicted to the stuff.

“People’s coffee ritual is very important to them and it’s something they do every morning,” Kleitsch said. “And so we want to fit into that ritual, we want to be a part of that, and that’s why we’re coming up with the grounds. So they can just replace [their current coffee] one for one.”

A video shot on campus at UW shows Atomo going head to head in a taste test against another certain Seattle coffee company:

Atomo has set a goal of $10,000 on Kickstarter, with a deadline of March 9. The crowd-sourced funds will be used to further development. The team is partnering with Mattson, a food tech company, and is bootstrapped right now, with eventual plans to seek investors.

Kleitsch said no one else is trying to build coffee from the molecular level up. The closest thing might be coffee without the black color. A company called Endless West does make molecular whiskey, and Kleitsch points to the Bill Gates-backed Impossible Foods, makers of a plant-based burger that “bleeds.”

When told that maybe Gates would like coffee without the bean, Kleitsch said, “I hope he does!”